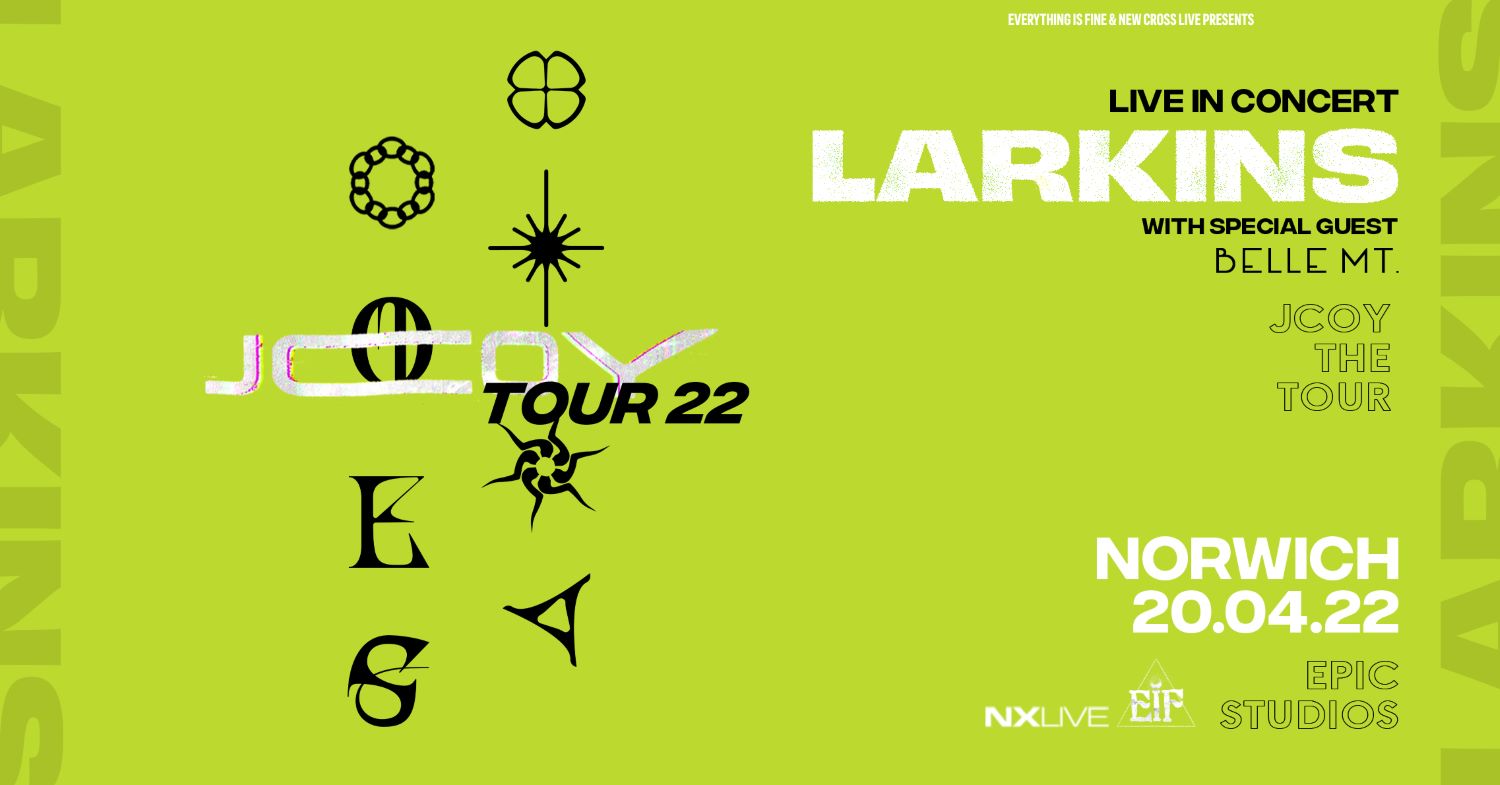 After working tirelessly over the last few years to establish themselves as one of the hottest alt-pop acts on the scene, Larkins finally unveil their hugely anticipated debut album – JCOY, out via Good Soldier.

From the massive stadium pop of “Are We Having Any Fun Yet?”, through the heartfelt confessions of “Digital Love”, to the driving polyrhythms of “Hurt Your Heart”, Larkins take us on a kaleidoscopic musical journey across eight spellbinding tracks (which they exclusively livestreamed as part of a special performance for their fans in July) which is nonetheless unified by an unflinching candour and the deft alt-pop hookcraft for which the group have become known.

Larkins singer Josh Noble wrote and produced the album himself from his flat in Manchester, acquiring the help of close friend Dan Nigro (Olivia Rodrigo, Conan Gray), Sir Nolan (Alec Benjamin, Justin Bieber), and Michael Pollack (Justin Bieber, LAUV) virtually. Josh then sought out additional production and mixing from Andrew Dawson (Kanye West), Mitch McCarthy (Olivia Rodrigo), and Serge Courtois (Alec Benjamin). Although nervous about his first venture into production, the result is an album that sounds totally unique and new. Lyrically, the record is an uncompromisingly honest account of how it feels to come of age in the 21st century, precociously self-aware in its fearless accounts of navigating love, sex, friendship and mental health in the digital age.

Indeed, Larkins are – in spite of the hype – an exceptionally thoughtful band, very much at the vanguard of their own generation’s considered conscience. The band have proudly built a fanbase through Instagram messaging, Twitch streams and Discord servers. The band’s bassist Henry Beach has taken ownership of their social media, boldly enforcing inclusivity. The band have opened up a dialogue with fans across social media on how best to ensure all feel safe and welcome at live shows, and have also put out a call for female engineers to help ensure their touring crew remains diverse and of equal opportunity. They pride themselves on eco-friendly touring, and have a self-designed clothing line, Animals in Costume, which is all ethically sourced.

Originally from the small town of Glossop in Derbyshire, Larkins quickly established themselves as “one of Manchester’s great new hopes” (NME). They’ve since sold over 10,000 tickets, played the legendary Reading and Leeds Festivals, showcased their sound in the US and Canada, and on their forthcoming tour will play back-to-back shows at Manchester Academy – one already sold out. They’ve also accumulated more than 20 million streams across platforms, all without having yet released an album.

Building on influences including Fred again.., Halsey and Jeremy Zucker, Larkins bring an anthemic pop twist which is all their own. JCOY is a cohesive, dazzling body of work which is sure to cement Larkins as one of the global breakout acts of 2021.