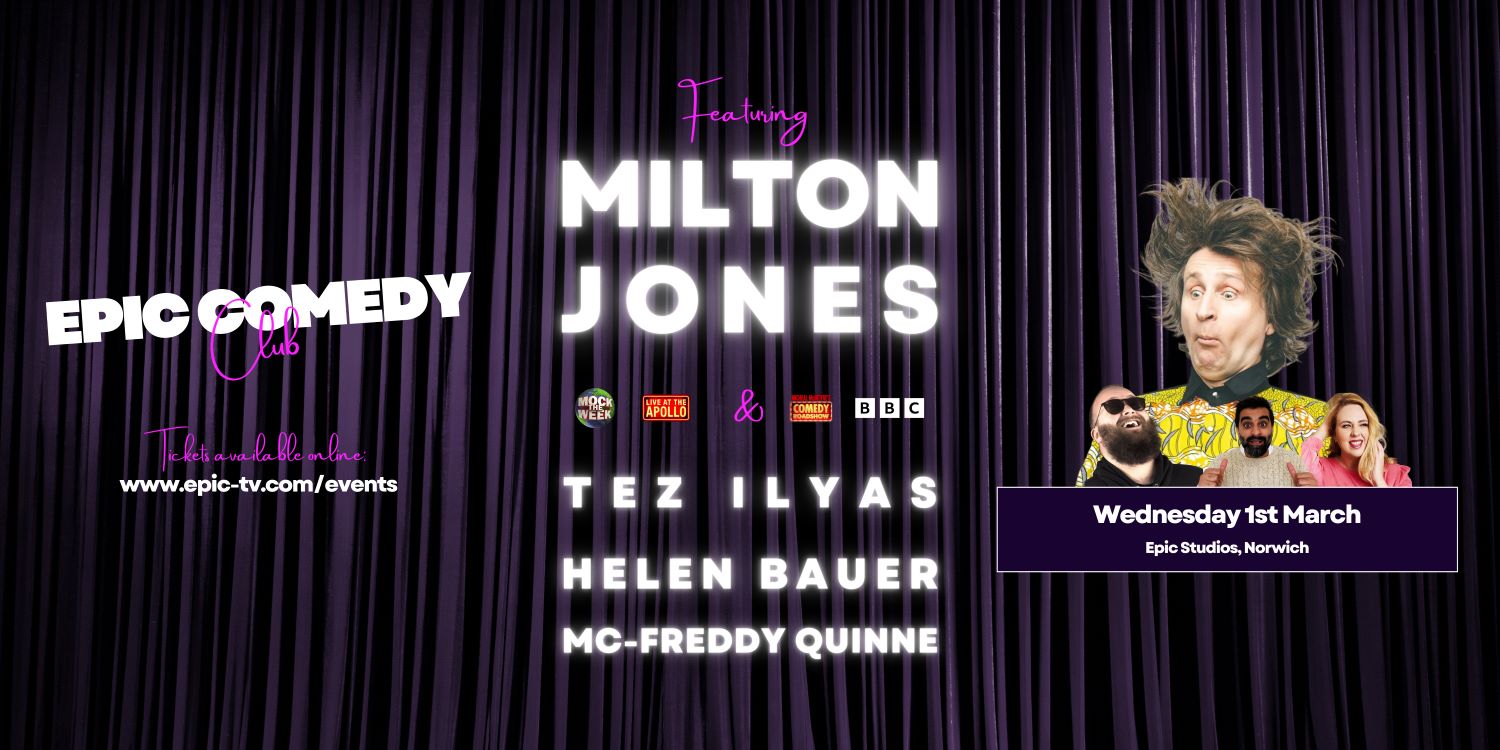 Welcome to the to another installment of The Epic Comedy Club Live at Epic Studios!
Our brand new comedy club will be taking place at the beginning on every month and we’ll be hosting some of the finest comedians around…

Milton Jones
Milton Jones is regularly on Mock the Week (BBC2), has appeared on Michael McIntyre’s Comedy Roadshow (BBC1), Live at the Apollo (BBC1) and he has headlined Dave’s One Night Stand (DAVE).
He is a previous Perrier Best Newcomer and Nominee, Sony Award winner and British Comedy Award nominee.
His sitcom pilot The House of Rooms written with Dan Evans went out on Channel Four in January 2012.

Milton has also written a novel called Where Do Comedians Go When They Die? which was described by the crimewriter and comedian Mark Billingham as “Hilarious, moving, and truthful. Finally a book that tells you what it’s really like to tell jokes for a living. And no-one tells jokes better than Milton Jones”.

Helen Bauer
Known for being a comedy powerhouse with an electric stage presence, Helen is one of the UK’s most exciting rising stand up stars.After leaving college with an E in Economics and an allergy to the education system, Helen Bauer moved to London to share a bed with her cousin and work in Accessorize on Oxford Street. She lived in London until she was 23, making sketches, waitressing and drinking. She then moved to Berlin to do the same there, and discovered stand upHelen honed her comedy skills performing in Germany. You can now find Helen’s creative writing, charming attitude on stage and special love of pop music all over Britain.

Tez Ilyas
Tez Ilyas is one of the most celebrated stars in British comedy.In 2015 Ilyas achieved phenomenal success with his debut stand up hour TEZ Talks. A sell out run at the Soho Theatre and his own Radio 4 series based on the show followed, with a second series quickly being recommissioned. In 2016 his highly anticipated follow up show Made in Britain went on to sell out every single performance (including extra shows) at the Edinburgh Fringe and gained spectacular critical acclaim, with a smash hit nationwide tour in 2017. His third show Teztify once again delivered a spectacularly powerful, provocative and brilliantly funny hour of topical stand up, delivering to packed out audiences night after night.

MC – Freddy Quinne
Based in Manchester, award-winning comedian Freddy Quinne’s ‘uniquely northern observational humour’ (Lancashire Evening Post) has seen a meteoric rise into some of the biggest clubs in the country. Quinne couples “clever, well placed gags” (Pickled Egg) together with a vulnerable persona for a unique experience which combines to make ‘a real tour de force performance’ (Alex Boardman). His willingness to break away from his set and involve the crowd leads for an engaging and memorable set backed up with frantic energy and raw emotion.